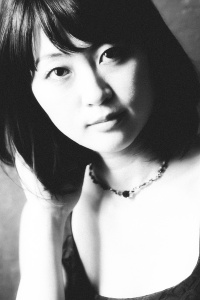 Born in 1980 in Kagawa / Japan, Shuri first encountered piano at the age of three years. She graduated in piano at the Toho School of Music (Tokyo / Japan) with Prof. Yoshimi Tamaki and Naoyuki Inoue. Shuri Tomita has already completed her studies in ”Künstlerische Instrumentalausbildung” at the Folkwang Hochschule Essen with Prof. Michael Roll and the Master of Music subject at the Hochschule für Musik und Tanz Köln with Prof. Vassily Lobanov.
She has received numerous awards, including the prize at the 51st All Japan Student Competition in Tokyo / Japan, the prize at the Folkwang Prize 2007 in Essen / Germany, second prize at the ”International Music Competition 2009″ in Osaka / Japan, first prize at the Music Prize of the Sparkasse Aachen 2010 and first prize at the ”International Debussy competition” in Salzburg 2012.
In recent years, she has given performances in various countries as a soloist with Seto Philharmonic and New York Symphonic Ensemble, as a chamber musician amongst other artists such as Anton Straka (concert master of the Vienna Philharmonic) and Czech String Trio. Since 2006, she organizes ”CROSSAir” with accordionist Tomomi Ota her concert series with various solo and chamber ensembles, and in 2011 began her own project ”Piano Plus” in her hometown Takamatsu.

Between 2010 and 2011, she taught as a repetiteuse at the Folkwang Hochschule in Essen, Since 2012, Shuri Tomita works as a lecturer at the Hochschule für Musik und Tanz Köln.
She became a tourism ambassador for the Takamatsu city Japan in 2011, won the Cultural Award in 2012, Kagawa Prefecture and the Cultural Award for the Takamatsu city in 2019.